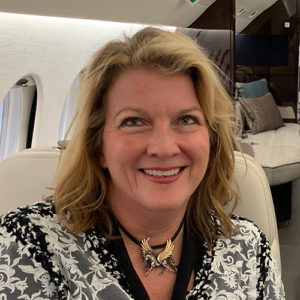 Holly is a graduate of UT Austin’s Texas Creative program, perennially #1 in the nation for strategy-trained advertising copywriters and art directors. Right out of university she was the copywriter for a number of global aviation brands (e.g. Aerospatiale, Eurocopter, Mooney, Raytheon, Signature, TBM, Duncan, Butler and KC Aviation, a Kimberly-Clark subsidiary), and was mentored in strategic planning for these clients.

Since then, she has developed two agencies of her own, the second of which is Horsefly. A curator of team talent, her agencies have been awarded two Addys and Best in Show at the prestigious AIM awards twice — with small-budget clients, beating Wrangler Jeans — and she has served on several boards of directors. Holly counts her biggest wins in creative as a 33% response rate in direct mail (no decimal there!) and more than doubling brand awareness and nearly doubling brand preference for a client in 2 years, a fast rise considering their average price point of $80,000.

Her portfolio contains a who’s who of aviation and equine brands, along with many in the medical, software/tech, and nutrition categories. She has lived in ten states, and now is back on the west coast of Central Florida, where she grew up flying and boating. After decades of serious riding, she returned to her roots in “sea and sky” adopting scuba as her new obsession, and getting back into flying, including gliders and seaplanes. She is certified PADI Rescue Diver/Wreck/Deep/Nitrox, and FAA Commercial SEL/SES/Glider w/Instrument, and tailwheel. She is a county commissioner, chairs the local tourism board, and serves on several other community boards. Email Holly